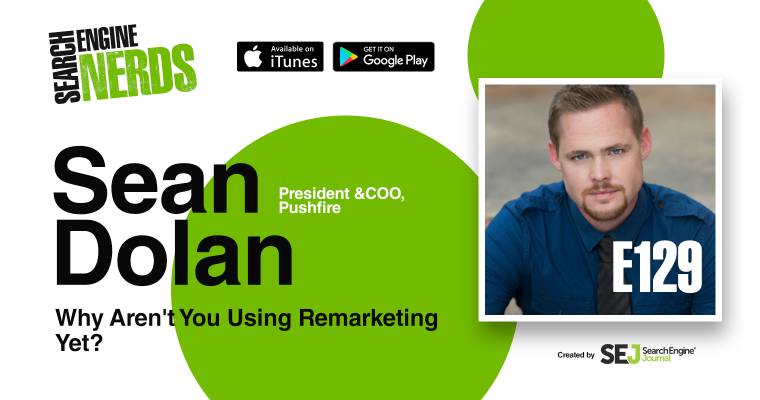 Why Aren’t You Using Remarketing Yet? [PODCAST]

Sean Dolan of PushFire joins Kelsey Jones to discuss the basics of remarketing, how it can be used in campaigns, what to test, and how...

Remarketing is a great way to bring back people who visited your site without converting. But why aren’t many marketers using remarketing yet? Read on to find out more about the remarketing world in this Search Engine Nerds episode.

Sean Dolan, President and COO of PushFire, joins former SEJ Executive Editor Kelsey Jones to discuss the basics of remarketing, how it can be used in campaigns, what to test, and how to ensure its success. Dolan also gives us a primer on why you shouldn’t necessarily worry about where your remarketing ads are appearing and how they usually lead to cheaper conversions. How does mass personalization tie into remarketing?

Sean: Mass personalization is basically combining large data that we’ve had for a while and targeting people based on it. I think a lot of people gravitate toward Facebook when they think of that and ways you can really segment your audience. When it comes to remarketing, it’s like being able to tag people in the online world with your brand or a certain set of behaviors.

You create this custom audience based on these behaviors and on certain data you’ve been able to pull, and you’re able to create custom audiences that you can target. So when someone comes to your site and you hit them with a remarketing code, you have this huge list of people under your remarketing list. Now you can go to Facebook and segment them using all this personalization data; you can segment them into very specific messaging.

I work with a lot of investors that do home flipping and they’re looking for motivated seller leads. They’re trying to find off-market leads on people trying to sell their house but have not yet signed with an agent. It’s difficult to determine what that person is because they are all races, all incomes, all ages. There’s a lot of different reasons someone needs to sell a house. But if we take people we’ve already filtered by coming to our site through search ads, we already know they’re looking to sell their house so we drop the cookie and reach back to them on Facebook where we can segment those ads based on very specific interests.

If they’re into dogs, we can put a puppy in the ad. If they’re older, we can target ads based on selling to an investor versus reverse mortgages or other options that an older person would be considering. If they’re younger, we can speak to them through ads that discuss how selling a home is faster and much easier than fighting with another member of the family about listing your home and how to show it. So mass personalization allows us to take these remarketing lists and really speak to individual behaviors that are going to get higher click-through rates and better conversions for a cheaper cost.

Kelsey: Yeah, I like that. I have heard it can be really successful to remind people what they were looking for and give them exclusive offers that maybe they didn’t see in the first place.

Do you think remarketing works for any industry or has it worked better for some industries compared to others?

Sean: Yes, absolutely. I would test it under every circumstance. Prove that it doesn’t work, don’t assume it doesn’t.

From my experience, it’s worked everywhere except for one particular situation – with emergency plumbing. We’re getting all this traffic and if we don’t get them right when they call in, whatever the conversion rate is, that typically stays the same or we notice that spending money on remarketing did not provide us any incremental sales.

Remarketing performed very poorly because they either hired someone or I guess their house flooded. They weren’t price shopping a lot, they weren’t waiting until the husband or wife got home; they took action. There wasn’t a lot of lemon juice to squeeze out of those lemons.

So anything that’s got a 24-hour sales cycle, it’s gonna be tough to find any value.

Kelsey: That’s a good point. I think when it’s something where they have to make a choice right then, remarketing probably won’t be as successful.

When it comes to building remarketing campaigns, what are good parameters in terms of length?

Sean: The general consensus is 30, 90, 180-day cookies. It really depends on your sales cycle. I recommend that if you don’t know the answer, talk to the sales team or talk to your client. Figure out what that average buying cycle looks like. Is it three months? Is it 180 days? Whatever it is, that’s the remarketing length you’re looking at.

I have a bunch of these investor clients and what we do is we set different messaging. So we’ll have a first 30-day cookie and for those first 30 days, we’re showing them ads that just reiterate the original call to action of “sell your house fast, sell your house for cash as is,” etc. After the first 30 days, we have another set of ads in a different list that fires a different set of ads which say you could’ve sold your house by now. That’s a really effective way to manipulate those cookie lengths. You can set certain ads to different cookie lengths that way.

But I would say generally, stick to your buying cycle. If you’re going to test and really don’t know what to test, 30, 90, 180 is fine. I believe a year and a half is the longest, and we’ve seen about two or three conversions that were cookies a year ago or more. We have people that took a year to convert. But when you separate those out, you can actually go in and see where those conversions came from. So you get an idea and evaluate which one of those cookie lengths is performing best.

You brought up a good point about changing your messaging depending on the length of time. Do you think that’s something every campaign should be testing? Sean: I think it depends on how your market changes. I could see if you’re selling shoes or shirts, the remarketing traffic is going to be a lot cheaper. Because they’re cheaper to get, maybe you can offer a compelling ad 30 days in if they haven’t purchased something, maybe turn the screw a little bit by offering a discount.

I always tell people to put themselves in the situation of the buyer — certain companies understand their buyers more than others — and imagine what happens after 30 days or what happens after 90 days. What is the message you want to tell those people? That’s the best advice I can give, but I definitely think people are missing out on changing those ads up. I think a lot of people are overlooking the opportunity of changing their messaging.

In terms of deciding how much to spend on remarketing versus your original PPC campaign, is there a good ratio to follow or does it depend on testing?

Sean: I wouldn’t necessarily put together a specific budget set aside for remarketing. What I would say is if a client or you as a business owner have a specific budget, let’s say $5,000 for the month, I would $4,000 dollars in pause everything but remarketing. If you have to hit $5,000, remarketing should be the last thing you pause because you’ve already paid the highest price for putting them in the funnel. I would nurture those people with remarketing and see how that plays out toward the end of the month. That would be my advice and the way to approach it.

I have a client in Houston who’s a big AC/plumbing company, and we are constantly aware of their capacity. Because while we’re fighting to get as many leads, once we hit capacity, all the trucks are full, right? We don’t want to pay for any more leads. And I always tell them that as we’re approaching capacity, AdWords are the first thing we pause because they already have sunk cost of TV, radio, and billboards. All the things they do, they’ve already paid for. So if we’re going to convert somebody today, we’re going to convert them based on sunk cost, we’re not going to buy a new person.

It’s kind of the same thing with remarketing. We’ve already paid for these people to come into the funnel. Let’s convert them cheaply for the rest of the month versus continuing to spend these $30-a-click or $50-a-click search ads or Facebook ads to bring them to the top of the funnel. Instead of setting aside a budget, I would rather set aside 30 percent or 20 percent of that monthly budget to pause and play out remarketing.

Remarketing is forgiving, it’s really hard to screw it up. I would say for most people, just do a blanket remarketing campaign. Target everyone that goes to your site, follow them through. If it converts good, converts at an ROI that works for you, then spend more money on it, make it segmented, and go from there.

What do you think the future holds for paid search in general?

Sean: It’s only going to get more expensive. The early adopters are always rewarded when it comes to emerging platforms or emerging strategies. I still think it’s early with remarketing, not everyone’s doing it. Most people are asking, “Should I do remarketing?” It shouldn’t even be a question at this point. Everyone needs to be either doing it or have tested it and proven in the 1 percent case that it doesn’t work for.

I think the future holds more business service providers opening up remarketing options: Snapchat, Reddit, Marco Polo even, some of these new emerging apps and platforms as they start to develop. Reddit has advertising as of recently, I don’t believe they have remarketing yet. Following these along and getting in early, you’re going to get such a cheaper CPA, you’re going to get cheaper leads, you’re going to make a lot of money. I think a lot of people wait too long, they wait until everyone’s proven that it works and then they get on board when it’s safe.

My biggest recommendation is to get in early. The second a new platform releases remarketing, get on it. Try it out, spend a few hundred bucks, see what happens. Stay on the edge of emerging opportunities for remarketing. Don’t be afraid of it.

To listen to this Search Engine Nerds Podcast with Sean Dolan:

Listen to the full episode at the top of this post Subscribe via iTunes Sign up on IFTTT to receive an email whenever the Search Engine Nerds podcast RSS feed has a new episode Listen on Stitcher, Overcast, or Pocket Casts

Think you have what it takes to be a Search Engine Nerd? If so, message Loren Baker on Twitter, or email him at loren at searchenginejournal.com. You can also email Brent Csutoras at brent at alphabrandmedia.com.